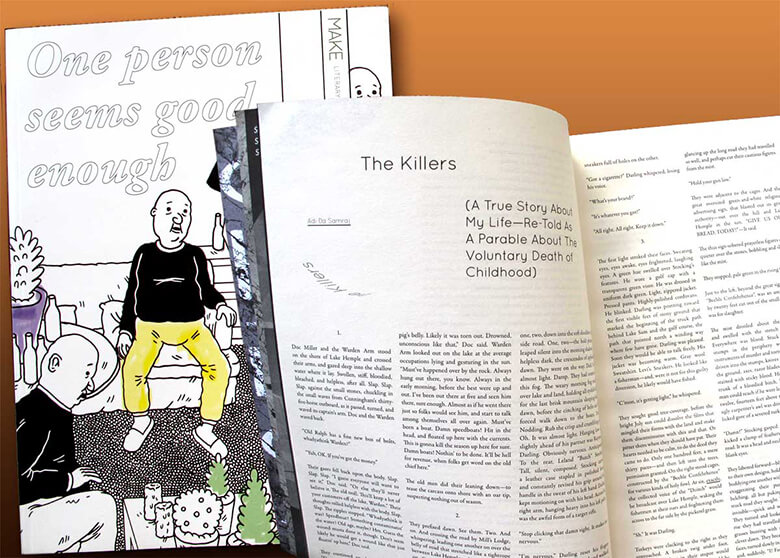 Da Orpheum (a division of the Adi Da Foundation) announces a new publication:

They. Possessed. Rag dolls, paper cuts leaping without poise, screaming, punching one another as they ran free into the forest. In the early of July. Why they rose so early in the morning? They rose as if transfigured by an inner dawn. Then to act some guilty progress through the mist and trick the dawn of summer half asleep—of summer half at play who never counted on deception in the heat, but blew light bubbles at the water’s edge, and churned the wheezing sun at ease until the buckless poachers with their picks and fire come to rest their packs and grief, like axe heads in the ice, to crack the brief somnambulance of summer tales that walk beneath the winter’s cold and droning sleep.

—from “The Killers”, by Adi Da Samraj

“The Killers” is a chapter of The Happenine Book, Book Three of The Orpheum, three unpublished novels in a mysterious and metafictional trilogy that tells the story of the “Great Sage” Raymond Darling. Book One is The Mummery Book, and Book Two is The Scapegoat Book.

The Orpheum trilogy is also designed to be performed theatrically—as a means of assisting the viewer’s entrance into the transformative subjective process that Adi Da intended The Orpheum to elicit.

Along with The Orpheum, Adi Da is the author of more than seventy books of philosophy and practical wisdom, and a visual artist with a large body of work in different media  (www.daplastique.com  ).

ENDORSEMENTS FOR THE MUMMERY BOOK

The Mummery Book is brilliant in all its aspects. It would be hard to express my happiness at the way it breaks and exposes the heart of the world. Living and working as a writer for many decades, I have not encountered a book like this, that mysteriously and unselfconsciously conveys so much of the Unspeakable Reality.

—Robert Lax, poet, author of Love Had A Compass (Grove Press), and (with Thomas Merton) A Catch of Anti-Letters (Sheed & Ward).

If Dylan Thomas and Buddha shared a soul, The Mummery Book is what I would expect from such a joining. The Mummery Book is a vortex which, if you will permit it, will enliven, awaken, and rejuvenate the soul not only of this mortal life, but the soul of every existence possible. The Mummery Book is lucid, wild, an unraveling portrait of ego-life and a radiant vision of transcendence, which pass each other on the heart’s walk across the pages of this luminous book.

Adi Da Samraj (1939-2008) was a writer, artist, and philosopher, and the founder of the new spiritual tradition of Adidam. Born in Queens, New York, he graduated from Columbia University with a degree in philosophy, and received his Master of Arts in English literature from Stanford University, where he participated in Wallace Stegner’s creative writing program. His master’s thesis, a study of core issues in modernism, focused on the literary experiments of Gertrude Stein and on the modernist painters of the same period.

During his lifetime, more than 70 of his books were published—a large body of literary, philosophical, and practical writings of unique significance. They have been praised by such luminaries as Alan Watts, Elisabeth Kübler-Ross, the artist Alex Grey, and the poet Robert Lax, who said of Adi Da Samraj’s novel The Mummery Book (the first volume of the Orpheum trilogy): “Living and working as a writer for many decades, I have not encountered a book like this, that mysteriously and unselfconsciously conveys so much of the unspeakable reality.” Adi Da is also an internationally recognized visual artist, whose work was exhibited at the 2007 Venice Biennale, as well as in galleries and art shows in New York, Los Angeles, Miami, London, and Amsterdam. .

ABOUT DA ORPHEUM AND THE ADI DA FOUNDATION

Da Orpheum is a division of the Adi Da Foundation and is responsible for the publication, dissemination, and theatrical production of the literary art of Adi Da Samraj. The Adi Da Foundation is responsible for bringing the legacy of Adi Da Samraj—his visual and literary art, his message about “prior unity” and world peace, and his philosophical and spiritual teachings— to audiences around the world.