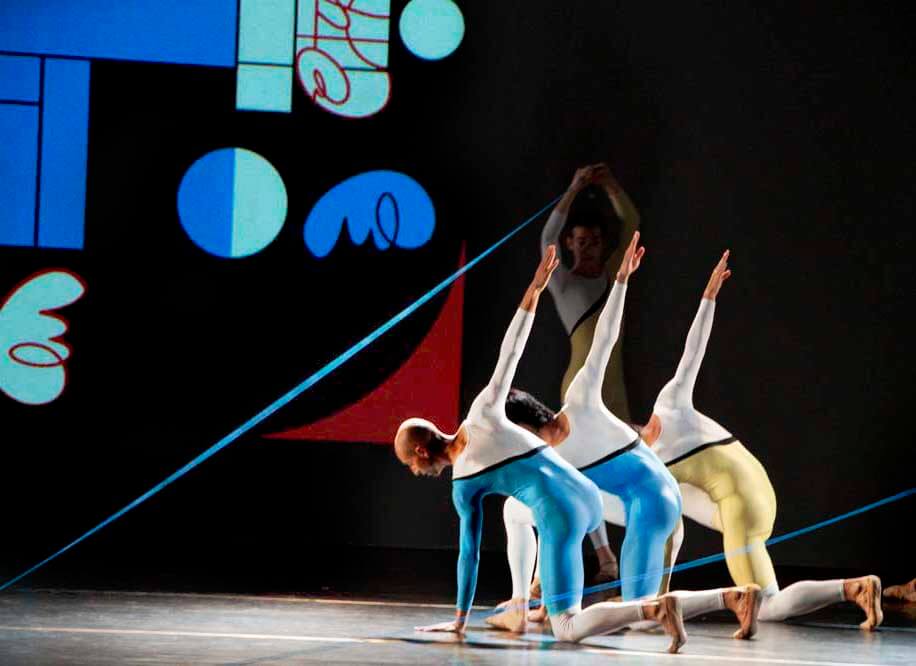 Divina.com, by the Florence Dance Company

The Ascent of Orpheus: Between and Beyond Representation and Abstraction—a solo contemporary show by the American-born artist Adi Da Samraj at the Bargello National Museum from July 9 to October 11, 2015—will coincide with a collaborative performance of Divina.com by the Florence Dance Company, on 9, 10, 11 July, in the Bargello Museum courtyard.

The ballet, inspired by Dante’s Divine Comedy, integrates monumental projects of images by Adi Da. The images move on screen in dynamic interaction with the dancers, and are also the inspiration for the costume design.

Divina.com is more than a dance and more than a multimedia work for the stage. It is a comprehensive aesthetic experience, inspired by Dante’s epic poem and the art of Adi Da Samraj. Divina.com follows the Divine Comedy as a journey from the darkest corners of human nature to its most illumined virtues. Simultaneously, it welcomes the voyager to discover, in the words of Adi Da, that “Reality Itself Is Truth Itself Is The Beautiful Itself”—through unguarded “feeling-participation” in Adi Da’s art. Founded on Dante’s epic work, Divina.com gives way to the unifying strength of the art of Adi Da Samraj, while embracing original dance, music, lighting, and costume design.

For the Florence Dance Company, our artistic work remains a quest for truth and beauty. This is ultimately what Divina.com is all about. The creative muses are each capable of expressing true concerns of human nature: the choreography transforms plastic movement and form into universal ideals; the music, while occupying time, suggests time itself; the light and darkness of equal measure define the enveloping space around the dancers; the costumes dress the voyagers, suspending them in a contemporary quality. The common denominator, through constant visual imagery, strives to meld all as a sensory experience in revealing aesthetic transcendence.

As for the title “Divina.com”: “divina” is a name that signifies "to be divine," while “.com” alludes to the Internet's power through communication to create unity. All art is contemporary upon creation and true art is divinely inspired. Thus Divina.com is a play on the name of Dante’s poem with deeper and contemporary meaning. In the title is Dante/Adi Da Samraj/Florence: “Florence” (other than being the home of Dante, and describing the artistic direction of the Florence Dance Company) refers to Firenze as cradle of Renaissance culture and contemporary inspiration, point of departure and architecture of return for Divina.com.

Inferno interprets the universal aspects of Dante’s story through movement, giving a sense of human struggle and entrapment, of souls in anguish and confusion, and a fruitless search for the divine light, which is seen as a faint glimmer beyond our grasp.A tapestry in motion weaves across the stage, in response to Dante’s vision and to the art of Adi Da Samraj, creating a sense of the great struggle to achieve divine order amidst the apparently hellish maze of experience. Finally the stark face of the “devil” appears as the root-source of our suffering, our “sin” or failure to meet the mark of love under all conditions. Thus, as in the famous portrait of Paolo and Francesca, Dante learns the great suffering of all sin, and is moved to transcend it by moving onward toward his loved one.

Eurydice One: The Illusory Fall of The Bicycle Into The Sub-Atomic Parallel Worlds of Primary Color and Point of View – Part Two: The Abstract Narrative In Geome and Linead (First Stage) – II, 3 (triptych from  Linead One)

For Inferno, the art represents in abstract terms Orpheus’ descent into hell to rescue his loved one Eurydice, and a visual exploration of their entrapment there. Although the elements are highly abstract, the parallel to Dante’s journey into hell can be intuitively felt. The abstract linead forms (free-drawn line forms) seem to fall from left to right across the panels, with the primary (fiery) colors of red and yellow dominating over blue and white.

Purgatorio finds us in between the extremes of heaven and hell, where, having faced the lessons of the inferno, Dante begins his ascent to the heavenly realm of light and love above.There is a sense of waiting and penance, of learning the path of light beyond the struggle of sinfulness, but as yet the forms of experience only tend to continue and repeat, never fully resolving in the present-time enjoyment of the divine state of grace. The changed music and art suggest a sense of streaming consciousness - normal day life suspending in plastic time.

Eurydice One: The Illusory Fall of The Bicycle Into The Sub-Atomic Parallel Worlds of Primary Color and Point of View – Part Two: The Abstract Narrative In Geome and Linead (First Stage) – II, 14 (triptych from  Linead One)

The artwork for Purgatorio is full of abstract references to the struggle to ascend, with a complex maze of ladders and planes, and chairs for waiting, the sense of flight and hope portrayed in the free-line forms that are caught uneasily between shifting angles and rectilinear shapes. Here blue and white have begun to dominate the primary colors of red and yellow, but they are intertwined in a complex field without resolution.

Paradiso offers the final resolution of Dante’s story, with the dance performed on point to represent the glorious ascent into the heavenly realm of divine light and love. There is a series of visual movements in response to the nine spheres of Dante’s Paradiso. Here we see the divine house built according to the divine order and geometry, based on the strong foundations of universal unity and lovers forever united and as one. There is a celebration of angelic joy and ecstasy as Dante learns the model for living life according to the highest ideals, which resolves ultimately in the eternal life of divine radiance, where the perfumed garden grows untarnished and eternally bright

Eurydice One: The Illusory Fall of The Bicycle Into The Sub-Atomic Parallel Worlds of Primary Color and Point of View – Part Two: The Abstract Narrative In Geome and Linead (First Stage) – III, 1 (diptych from  Linead One)

In Paradiso, two images were selected, a triptych and a diptych, which communicate a sense of resolve of the heroic struggle of Orpheus to ascend out of hell and a sense of epiphany and ecstasy in the symmetry of the image elements. The final diptych communicates the resolution of blue and white dominating over the red and yellow flames of the inferno, with the final panel coming to rest with the purity of the white central sphere radiating amidst a pure blue field, a simple visual allegory to the divine domain of light above.

Maurizio Fasolo and Enzo Regi of the “trans-avantgarde” electronic music group Pankow, were invited by the choreographer Keith Ferrone to team with Stefano Maurizi, the lyrical pianist and composer, to create music that would evoke the orphic passage of Dante from Inferno to Paradise.

First, they recorded a shifting ostinato of original Divina.com sounds, chords, and thematic phrases that swirl in an out as the ballet unfolds, which then alternates with Stefano’s lyrical piano invocations and contemporary improvisation. During the actual performances, they interweave additional live music as they see and feel the movement and art evolving before their eyes.

Interspersed with the three principal musicians' work are solos from Lorenzo Castiglia on guitar and Hélène Tavernier whose deliciously breathed-sung textual punctuations are quotations from Dante and Adi Da Samraj. Each section is preceded by a piano prelude composed and performed by Naamleela Free Jones.

ABOUT DA PLASTIQUE AND THE ADI DA FOUNDATION