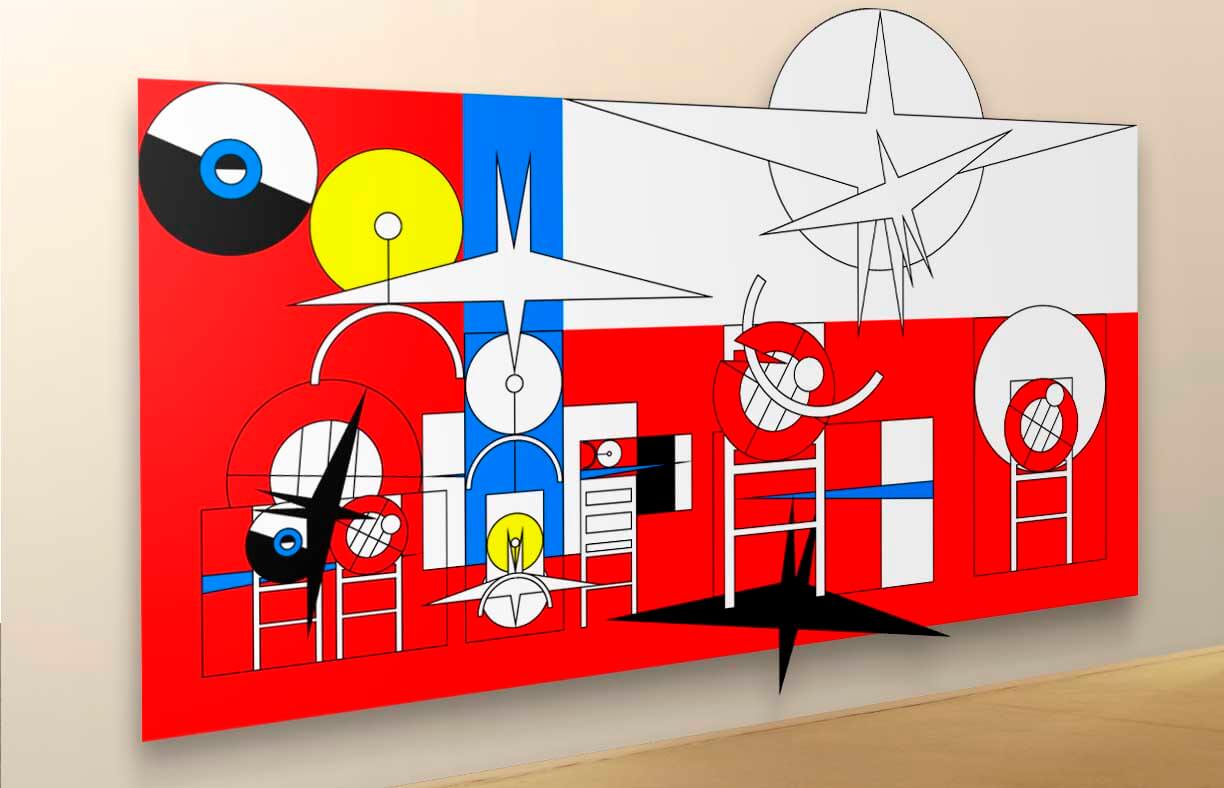 THE ASCENT OF ORPHEUS: Between and Beyond Representation and Abstraction

At the core of all of these stories of Orpheus is a descent from the world of light into the natural domain, and a subsequent ascent, or escape, from that domain. The red-and-black space in some of the images of Orpheus One is the realm of difficulty and suffering in which human beings live. However, the evidence in the images of Orpheus One, like the evidence in the myth of Orpheus, suggests another possibility than merely remaining in the realm of suffering—namely, ascent beyond, through the intrinsic transcending of the red-and-yellow field into the white field, or the realm that is free of the darkness made by ego-life.

For the first time in its 150-year history, the Bargello National Museum hosts a solo contemporary art show,  THE ASCENT OF ORPHEUS: Between and Beyond Representation and Abstraction, by the American-born artist Adi Da Samraj. In an unusual bridging of ancient myth and digitally composed large-scale fabrications, the exhibition is Adi Da’s sweeping and at times demanding retelling of the famous Orpheus and Eurydice myth. The exhibit runs from 9 July to 11 October 2015 in two galleries off the Bargello courtyard.

Through the nine large-scale pieces and the multimedia projection in the exhibition, Adi Da demonstrates his radical approach to “aperspectival, aniconic, and anegoic” art. Drawn from his Orpheus One and Linead One suites created in 2007, the digitally composed works, some never shown publicly before, demonstrate the artist’s reach beyond the linear perspective and individual “point of view” that have dominated Western art since the Renaissance. The exhibition is also a testament to Adi Da’s advance in what he considered to be the unfinished modernist project of the early 20th-century avant-garde.

THE ART OF ADI DA

Achille Bonito Oliva, the internationally acclaimed Italian art critic and historian who curated Adi Da Samraj’s official collateral exhibition at the 2007 Venice Biennale, notes in his essay in the Ascent of Orpheus exhibition catalog: “The abstraction of Adi Da Samraj is anti-rhetorical and aspires to restore humanity to a state of contemplation and reflection . . . His abstract images look upon the world from beyond any point of view.” The exhibition coincides with the 750th anniversary of the birth of Dante and opens with collaborative performances of the ballet Divina.com by the Florence Dance Company on 9, 10, and 11 July in the Bargello Museum courtyard. The ballet, inspired by Dante’s Divine Comedy, integrates monumental projections of images by Adi Da. The images move on screen in dynamic interaction with the dancers and are also the inspiration for the costume design.

Adi Da Samraj (1939–2008) created visual, literary, and performance art for more than forty years with a single intention: to produce works of art that would draw the viewer beyond the feeling of egoic separateness into the feeling of “prior unity.” His artistic output includes drawings, paintings, sculptures, and a large body of groundbreaking photographic, videographic, and digitally composed work. Adi Da’s work appeared as an official solo collateral exhibition at the 2007 Venice Biennale, in a solo show in the historic Cenacolo di Ognissanti (Florence), and in gallery and art shows in New York, Los Angeles, Miami, London, and Amsterdam.

Peter Weibel, Chairman of ZKM Center for Art and Media (Karlsruhe), notes that “[Adi Da’s] pursuit of the spiritual paths found in early abstraction, from Kandinsky to Mondrian, and [his] translation of that pursuit into the digital age, restore a transcendental spirituality to the materialism of the machine aesthetic.” Art critic Donald Kuspit has written, “Protean and unified at once, Adi Da’s ever-changing images become all-pervasive ‘big screen’ experiences, perceptually riveting, indeed, sometimes excruciatingly intense, but always balanced and even sublime sensory experiences.”

In addition to being a prolific artist, Adi Da Samraj is a widely recognized spiritual teacher who produced many volumes of literary, poetic, practical, philosophical, and spiritual writings.

ABOUT THE BARGELLO MUSEUM

Occupying one of the oldest structures in Florence dating back to 1255, the building became the residence of the Bargello (head of police) in the 16th century. The building’s transition to a national museum dates to the mid-19th century. Today, the Bargello National Museum houses many important Renaissance works of art— including a rich collection of sculptural masterpieces by Donatello, Luca della Robbia, Verrocchio, Michelangelo, and Cellini—as well as major collections of bronzes, majolica, enamels, seals, ivories, amber, tapestries, furniture, textiles, and the very lavish collection of medals belonging to the Medici family.

A 104-page catalog entitled, The Ascent of Orpheus: Between and Beyond Representation and Abstraction, accompanies the exhibition. Offering a visually rich survey of Adi Da’s Orpheus One and Linead One suites, the catalog includes images from the exhibition and numerous additional images from the two suites, as well as essays on the suites and selections from Adi Da’s own writings on art.

ABOUT THE ADI DA FOUNDATION AND DA PLASTIQUE