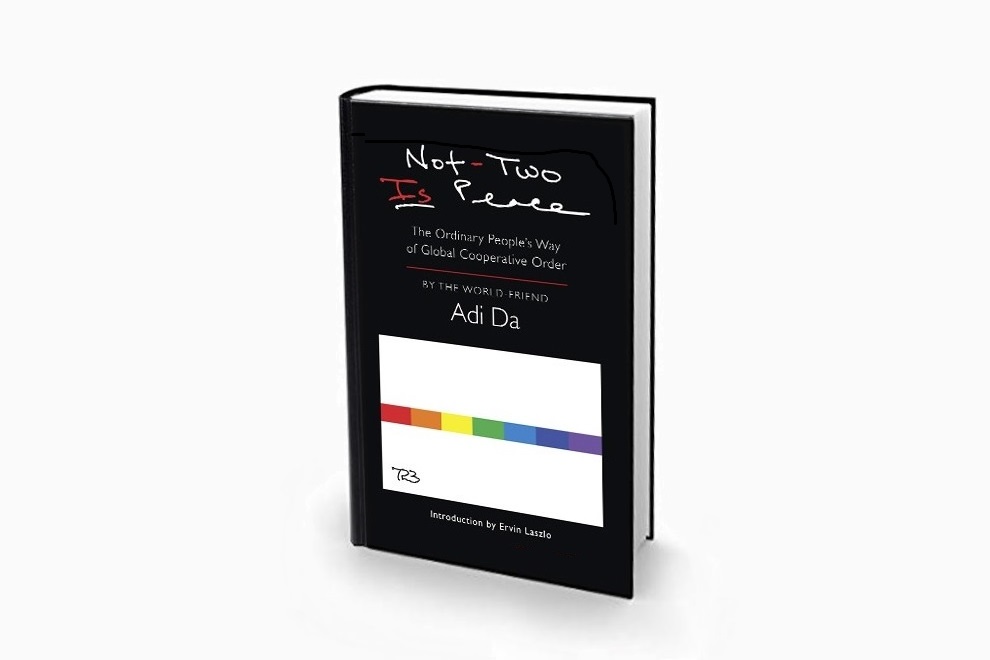 Da Peace (an element of the Adi Da Foundation) announces the publication of the fourth edition of the book:

Not-Two Is Peace: The Ordinary People’s Way of Global Cooperative Order
by the World-Friend Adi Da

A new kind of human consciousness is required—based on the working-presumption of prior unity, and on an understanding of the indivisibly single world in which everyone is living. This involves not only the notion that there is such a single world, but it requires grasping the necessity for cooperation, and the necessity to function on the basis of an understanding that the Earth is a single system, and humankind (likewise) is a single whole.

–from Not-Two Is Peace

You can read excerpts from Not-Two Is Peace, and order the book, at www.nottwoispeace.org

In this book, the World-Friend Adi Da speaks to the necessity of re-establishing human civilization based on principles of mutual trust, cooperation, tolerance, “prior unity”, and the limitless participation of all humankind in transforming its own destiny. This is a uniquely comprehensive address to the global crises of our time. Adi Da wrote Not-Two Is Peace out of concern for humanity's current plight. It contains His “radical” argument for transcending egoity along with His urgent call to found the Global Cooperative Forum-a new type of human order. This forum will allow humankind to become conscious of itself as one great coherent force-the only force capable of requiring and implementing systemic changes the world needs.

This fourth edition is essential study for anyone concerned about the state of global affairs.

There are three new essays in this updated edition: “All Modes of True Religion Point To Reality Itself”, “Humankind-As-A-Whole Must Collectively Address Its Real Issues”, and “No Enemies”.

SELECTED ENDORSEMENTS FOR NOT-TWO IS PEACE:

“At this crossroads in history, many serious attempts are being made to steer humanity toward a new and sustainable civilization. Among them, this book by Adi Da is outstanding as a unique and radical message oriented to meet the global state of emergency through a new modus operandi, “the working-presumption of prior unity”, and a Global Cooperative Forum that could empower the more than six billion inhabitants of the planet to take their destiny into their own hand. This vision deserves to be read and pondered, and decisively acted upon.”

—Ervin Laszlo
Founder And President Of The Club Of Budapest

In Adi Da’s wonderful book, this great friend of the whole world reaches out, with impeccably loving truth, profound compassion, and enlightened insight, to offer humanity a way forward to heal and re-solve our dis-membered psyche and thus our dysfunctional behaviors that continue to arise from its schism. Adi Da identifies its cause as our ego-based illusion of the apparent separation of the world and our collective forgetting of its and our “prior unity”. Not only is his understanding of unity-expressed-in-diversity vital at this pivotal moment in human history, but it is gaining compelling and transformational validation from the latest scientific evidence.

ABOUT THE AUTHOR, THE WORLD-FRIEND ADI DA

Having fully given his teaching, Adi Da lived independently on his island hermitage in Fiji, constantly working to express the Truth of existence through modes of communication to which all human beings can respond—including literary, theatrical, artistic, and philosophical works. Simultaneously, and most fundamentally, He was always working to establish his island-hermitage as a place from which his spiritual blessing could perpetually flow into the world, both during and after his physical lifetime. He passed from the body on November 27, 2008.

Adi Da is not political in any ordinary sense of the word. Rather, his address to humanity and the process of civilization comes from his lifelong intention of communicating the truth of existence—uncovering both the essential driving forces of limitation and suffering and the means to go beyond those forces.