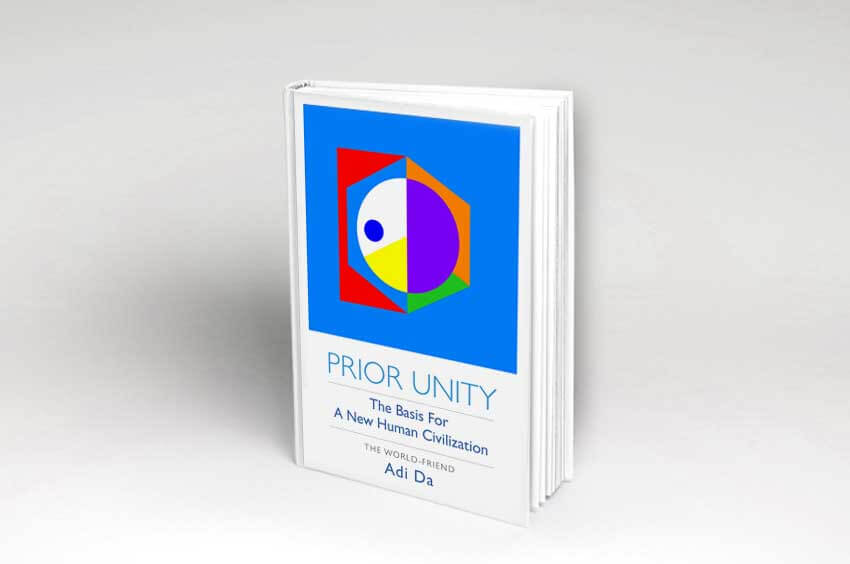 Da Peace (a division of the Adi Da Foundation) announces the publication of a new book:

Prior Unity: The Basis for a New Human Civilization
by the World-Friend Adi Da

A global transformation is now required in human culture—after the devastation, or collapse, of ego-civilization in the twentieth century. Something entirely new is required—something comprehensively right.

You can read excerpts from Prior Unity, and order the book, at www.priorunity.org

FROM THE INTRODUCTION TO PRIOR UNITY

The message of the book Prior Unity is that the impulse to peaceful, cooperative coexistence is humanity’s “true north.” The impulse comes from our root-intelligence as one single species, and, at the same time, reflects the inherent unity of all life. To satisfy what human beings truly want and need (security, and the opportunity for unlimited participation in our social, cultural and economic life), and to ensure a benign future for life on earth, we have no choice: We must transcend what separates us and build on the deep foundation we all share, which is our prior, or already-existing unity. The prophetic call running through the whole book is that if we want to find the real basis for a new human culture, we must look beyond the outer world of separate objects, others, and events to the source, the root-condition in which all our experience is actually happening. This is not a religious matter, nor even a spiritual matter in any exclusive sense. It is about the source-reality that has no name, that is not a deity, but which is the being-essence in which we exist, the limitless conscious awareness to which every one of us has access, regardless of our beliefs or philosophy.

SELECTED ENDORSEMENTS FOR PRIOR UNITY:

It is a rare event in human history when a truly enlightened master speaks directly to the world situation, what must be done about it, and the consciousness from which all action, individual and collective, must proceed. This is a profound book. We must take it seriously.

Every human being who reads Prior Unity will re-awaken to the truth that we are not separate individuals, nations, and races, but members of one global family that arises and exists as an egoless prior unity. Read this book—and take responsibility, with all seven billion, for the earth and all of humanity as a single system.

ABOUT THE AUTHOR, THE WORLD-FRIEND ADI DA

Having fully given his teaching, Adi Da lived independently on his island hermitage in Fiji, constantly working to express the Truth of existence through modes of communication to which all human beings can respond—including literary, theatrical, artistic, and philosophical works. Simultaneously, and most fundamentally, He was always working to establish his island-hermitage as a place from which his spiritual blessing could perpetually flow into the world, both during and after his physical lifetime. He passed from the body on November 27, 2008.

Adi Da is not political in any ordinary sense of the word. Rather, his address to humanity and the process of civilization comes from his lifelong intention of communicating the truth of existence—uncovering both the essential driving forces of limitation and suffering and the means to go beyond those forces.