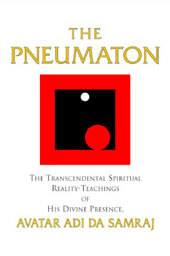 An Essay from The Pneumaton
by Avatar Adi Da Samraj

In Western (or Occidental) literature, mythology, and “religious” legends, stories, and doctrines, there is a characteristic and persistent tendency to associate a negative connotation or result with the quest for higher “knowledge” (and, altogether, with the process of esoteric initiation, esoteric “knowledge”, and esoteric Realization).

In the traditional Western (or Occidental) literatures, there is (characteristically) a “penalty” for those who approach the Divine too closely, or who even seek to Realize Oneness with the Divine. Indeed, the tendency to confine human existence and human potential to the mundane, the material, the physical, the social, and all that is merely exoteric is the principal characteristic of the Western mind, all of Western culture, all of Western “religion”, and all that characterizes the Western (or the “Westernizing”) and the “modern” (or the “modernizing”) influence and tendency.

In the ancient Jewish story of the Garden of Eden, Adam and Eve are penalized for taking the fruit of the Tree that would give them the unique “knowledge” that would put them on a par with “God”. In the myths of the ancient Greeks, Icarus and Prometheus are punished for “getting too close” to the sun and to fire—and, when Bellerophon rides his winged horse, Pegasus, up to the dwelling place of the gods, he is thrown down because he presumed he could attain the status of the gods. Likewise, Jesus of Galilee is, according to tradition, said to have been crucified for claiming Oneness with the Divine. As these famous examples (along with many other examples) indicate, the traditions of the West (or traditions that, otherwise, characterize what can be identified as the Western, or Occidental, mentality) are typically associated with the prohibition against higher (and, altogether, esoteric) “knowledge” and Realization. Therefore, there is a basic presumption in the traditional West (and in the characteristically Western mind) that one must neither own too much nor “know” too much—but, coincidently, the traditional West (and the characteristically Western mind) is possessed by a persistent fascination with owning and “knowing”, and even a kind of lust to own everything and to “know” all.

The characteristic tendency (and ambivalence) of the Western mind shows itself not only in literature, mythology, and “religion”, but also in the basic Western (and characteristically “modern”) inclination toward materialism (including scientific and political materialism), which is an enterprise of conventional “knowledge” (and of “worldly” power) that dogmatically eschews and systematically excludes all that is esoteric (or all that is metaphysical, or Spiritual, or Transcendental, or Divine). Therefore, the West (and all that is characteristically “modern”) is characterized by ambivalence (and even suppressiveness) relative to higher (and, altogether, esoteric) “knowledge” and Realization, and (otherwise) by a clear preference for exoteric and materialistic “knowledge”. It can even be said that Western culture (and all of “Westernized”, or “modern”, civilization) is founded not only on materialism but on an actual and persistent (and gravely limiting) fear of higher (and, altogether, esoteric) “knowledge” and Realization.

By contrast, characteristically (and traditionally) Eastern (or typically Oriental) culture and civilization is associated with a positive and most profound orientation toward higher (and, altogether, esoteric) “knowledge” and Realization. Also, the typically Eastern (and typically Oriental) mind and orientation is characterized by far less interest in (or attachment to) material things than is (otherwise) seen in the West (and, altogether, in the “modern”, or “Westernized”, “world”).

Therefore, the Out-Growing of the now universalized Western “esophobic” tendency, and its ambivalence, its materialistic revulsion, and its suppressiveness relative to the “esophilic” (and not merely Eastern, but Really Spiritual, Transcendental, and Self-Evidently Divine) Process of Self-Realizing the Self-Nature, Self-Condition, and Self-State of Reality Itself is the principal necessity for even all of humankind in this “late” (or “Westernized”) time and in this “dark” (or “modern”) epoch.