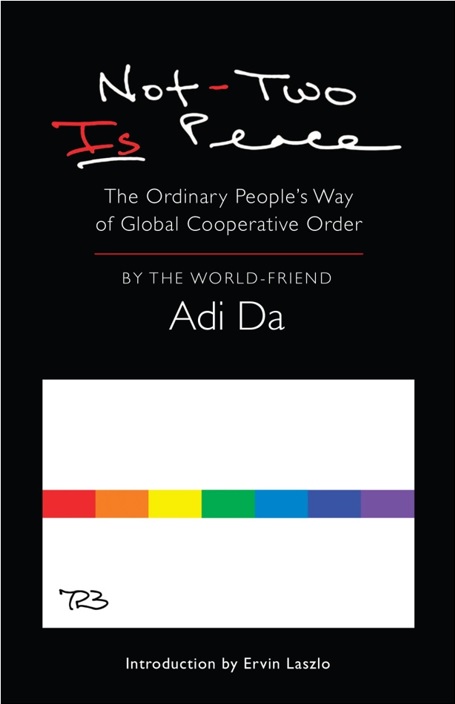 I Am Looking for men and women who will live free of every kind of seeking, attendant only to the consciousness of universal prior unity, who will constantly devote themselves to the responsible cooperative management of individual and collective human life in the Indivisible Form and Logic of Reality Itself, rather than the egoic and separative form and "difference"-bound logic of egoity and illusion.

Such men and women are the unexploitable human presence of Reality Itself.

They will not devote themselves to turning the world to dilemma, seeking, life-exhaustion, and mere experience bereft of wisdom.

They will not devote themselves to the gross exploitation of desire and mere conditional possibility.

They will not devote themselves to strategic ascent to various goals beyond, or to absurd evolutionary aims, or to merely conventional exoteric and esoteric human transformation.

They will actively function in the Intrinsic Pattern of Reality Itself, turning themselves, and all of humankind, and, indeed, all things into unconditional relatedness and balanced well-being.

They will everywhere remove the effects of previous separative action, and restore the form of life to prior unity and indivisibility.

They will design and enact every kind of stability, and they will constantly re-discover the Beautiful Itself.

They will everywhere establish the presence of undivided peace.

Their perception of present form is always already stable and whole, and not a mere reflection of some other time or event.

They will not think and do the world as if it were merely a symbol for entirely other and would-be things.

They will constantly assert the egoless Form and Pattern of Reality Itself, while always conscious of the prior unity of all.

They will always serve the order of egoless wisdom and seamless knowledge.

They will always make only economic and wise use of science and technology, or all of conditional knowledge and its applied capability.

They will not be motivated merely by clever human invention, but by Reality Itself, Which Is the Always Present, and Which Is the Intrinsically Seamless Totality communicated in all forms.

They will not pursue any kind of human victory over the natural domain, or any kind of ultimate victory for some by means of the permanent defeat or domination of others.

They will always only enact the conditions for present universal balance and well-being.

They will always promote and uphold the universal wisdom of egolessness, in which right understanding of prior unity is the always public foundation of existence.

Thus, I Look to Establish a new global order of men and women, who will actively establish and sustain a universal new human age of sanity and wisdom.

That new age will not be an age of the occult, the conventionally religious, the scientific, or the technological glorification of humankind.

Rather, that new age will be the anciently expected universal age of authentic human existence, wherein human life will be everywhere engaged entirely apart from the tragic history of human ignorance, dissociativeness, bewilderment, and great search.

The would-be “new age” envisioned by mere seekers is a spectacular display that only extends the traditional madness, exploitability, and foolishness of humankind.

Therefore, I Am here to Awaken a new global order of men and women, who will not begin from all that was, but who will, instead, apply themselves, apart from all dilemma and all seeking, to the harmonious event of prior unity and cooperative peace.

That new universal order and age of global humankind will be always Illuminated by the Intrinsic Freedom of Reality Itself, and it will be always Thus Bright and New.